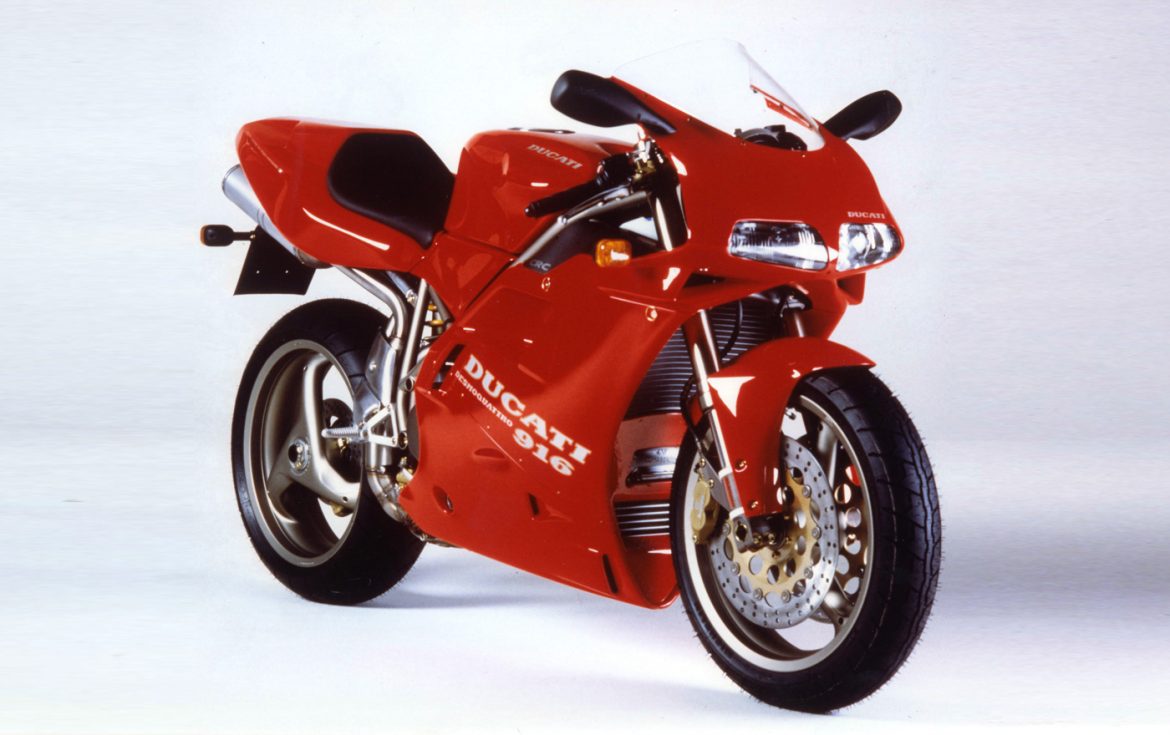 Vendors are now trying to get a foothold on almost every new bike. It’s a road sport and it’s an enduro for enthusiasts. But what class is a bike that has a bit of everything? A good bike should have a reliable engine, comfortable ergonomics and easy handling?

Rumour has it that Tamburini was influenced in the design of the 916 by a Honda NR750. That’s where he got the idea, with twin mufflers on the tail and two slanted headlights. Maybe so. But, if it were copying, there would also be ventilation slots in the fairings in the style of the Ferrari 512 Testarosso, and turn indicators in the rear-view mirrors, and there aren’t any. Some layout solutions have probably been borrowed, but the construction and design have turned out to be original and, above all, ingenious.

The bike has a clear, slightly sloping line running along the seat surface, the lower edge of the fuel tank and the junction of the cladding panels. The tank is tall and bunched, it’s convenient to lie on it on long straights for maximum speed, and in turns its upright rear wall reliably rests on the outer legs for turning. The wide, flat front end cuts the reverse wind flow into two parts: half goes down to the large, curved radiator, while the other half bounces off the convex windscreen and up the driver’s side. The two triangular air intakes under the headlamps are located in the area of maximum pressure and act as an inertia drive, delivering fresh air to the large air filter box under the fuel tank.

The double oval mufflers upwards under the seat have become a worldwide trend. Almost everyone has copied it sooner or later. The trend has died out, but the first to put it into production was Ducati. The 916-998 series was produced from 1994 to 2001, i.e. for eight years. By the standards of sports motorbikes at the time, that’s incredibly long for a design. It’s just that the bike turned out, and it was a bit ahead of its time, which allowed us to concentrate on improving its technical side without investing in the aesthetics. Aesthetically, it’s still great.

The engines can be traced back to the Pantah engine with desmodromic valve drive and belt-driven camshafts. No, they are not the same, and you can’t swap the guts of one in the crankcase of the other, but the technical solutions used in their construction are identical. The old 916 cc engine does not impress with its power. It has 114 hp, the engineers have inflated it up to 150-160 hp in the racing versions, thanks to the reliability such a forcing was possible. The engine runs noisily, in the style of polyphonic cacophony. The dry clutch basket has the solo voice, which plays the aria “a bucket of bolts” while squeezing the lever tightly. But it must be understood that this is essentially the engine of a sports bike, not a pizza delivery truck, and it doesn’t need to be quiet.

Ducati was the first to produce an injected sportbike. Yes, it was a rather primitive system with manual control of the air flaps in the mid-1980s, but it works quite well, and the main thing is that it is stable. The engine revs up reliably and has a couple of interesting bites, which make for a joyful and fascinating ride. If you know all its features and use them actively, you won’t get bored on the road.

The primitiveness of the injection system conditions an excellent feedback. You can literally feel with your right hand what is happening with the rear tyre of the bike and you can press the throttle very precisely, approaching the limit of the grip properties of the rubber, but not exceeding it. But for that you have to have riding experience. Inexperienced riders, the 916 can severely punish inexperienced riders by throwing you out of the saddle.

The Ducati 916 Senna III has a fairly powerful 109 hp engine. Despite the fact that good motorbike models are very solidly priced and their season is relatively short, the motorbike market is growing rapidly. And if the dealers are to be believed, some newly introduced models of motorbikes at the start of the season are selling like hot cakes.

The motorbike has long since ceased to be an alternative to the car and the days when people bought motorbikes only because they couldn’t afford a real car are long gone. Today, two-wheeled vehicles can in many cases be described as technological marvels, and their price is comparable to that of prestige cars.

Many people have started to buy motorbikes as a hobby, as riding or even collecting them has become a good hobby for many people. Many motorbikes such as the Ducati 916 Senna III, whose specifications make it a prestige brand, are sought after by beginners and experienced riders alike.

The 916cc bikes are the result of a great deal of work by the inventors, who sought to create a model that would be as good as other bike variants in terms of performance. In some cases, they are not only as good as, but better than other bikes, with minimised fuel consumption and other excellent characteristics.

Motorbikes with a displacement of more than 400 cc, including the Ducati 916 Senna III, cannot bear the title of “beginner’s bike”. On the contrary, it is already a serious machine that requires a certain amount of control over a smaller displacement bike. Yes, it attracts more attention, it is the best looking, the fastest, the most interesting and has a huge range of models. But with more power, the weight of the bike inevitably increases. You are unlikely to find bikes under 180 kg in this category, unless they are the latest models.